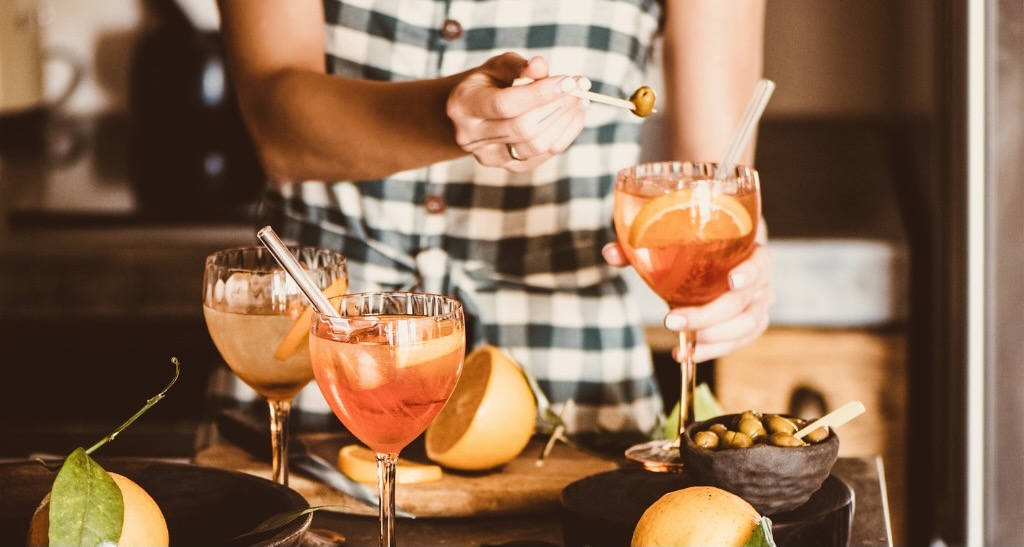 The early lockdowns of last year marked the start of a cocktail-making voyage for many consumers. Stuck at home with little else to do, cut off from their favourite bars and restaurants, imbibers started mixing their own drinks - many for the first time. This new behaviour opened a door of opportunity for brands and necessitated a shift in strategy. But as vaccine programmes roll out and restrictions lift, the on-premise is creaking back into life. What does this mean for the previously all-important 'home premise' occasion?

According to data from CGA Strategy, in May 2021, 39% of out-of-home cocktail drinkers in the UK were drinking cocktails at home. Out of these, 44% say they will make cocktails at home less frequently now the on-premise has reopened, stating their desire for perfect serves and experience-led occasions. However, 47% of at-home cocktail drinkers plan to continue mixing their own drinks as often as usual, while 8% will be making them more often. As such, says CGA, the at home cocktail occasion still represents a "significant opportunity" for suppliers.

This is good news for producers that have invested in fledgling growth areas and installed new practices to suit today's changed market dynamics. Bacardi, along with many others, has produced a steady stream of what global marketing and innovation officer Toby Whitmoyer calls "infotainment" across its social media channels, providing novice cocktail makers with inspiration and guidance.

For those who need a more detailed step-by-step guide, Whitmoyer notes that Bacardi's cocktail kits "continue to be a big hit". These packages "take the guessing game out" of making cocktails and have also proven to be popular gifting items during the pandemic.

However, in recognition of the varying levels of knowledge and interest among consumers, Bacardi has been adding new tools to its arsenal to make the cocktail-creation process as accessible as possible.

"During lockdowns, we saw cocktail awareness go through the roof as people dusted off cocktail shakers and improved their home mixology skills," says Whitmoyer. "But it goes without saying that we must cater to all levels of skill and we know how important convenience is."

This, he says, is where Twistails comes in. Launched last year, the range of cocktail pods aims to simplify home drinks-making and comes in three varieties: Bacardi Mojito, Bacardi Strawberry Daiquiri and Bacardi Rum Punch. To create the drinks, users just add water and ice to a Twistails shaker, attach the strainer and cocktail pod, then shake.

"Results so far are really positive, with one in four consumers coming back to buy a refill tube within 30 days - that's in line with industry benchmarks for e-commerce businesses," says Whitmoyer. The product is currently available in the UK, the Netherlands, the UAE and Germany, "with more markets to come".

A number of other large drinks groups are increasing their presence in cocktail tech: in June this year, Pernod Ricard USA signed a deal with the Drinkworks home bar system to develop co-branded cocktails. Drinkworks, which also operates using cocktail pods, is a joint venture between Keurig Dr Pepper and AB InBev, and already has an established partnership with Brown-Forman.

In 2017, Beam Suntory invested in at-home cocktail technology Bartesian, which combines spirits with pre-mixed cocktail capsules. In April this year, Bartesian raised $20m in funding to support its domestic and international growth, at the same time adding actor Mila Kunis - a partner of Beam Suntory - to its board of advisors. In 2020, Bartesian's year-on-year revenue increased by 975%. According to CEO and founder Ryan Close: "It is time to scale up to meet the growing demand and enter new markets."

Bacardi followed up the launch of Twistails with another aid to democratise cocktails: the Mix Lab app. The platform features 300 easy-to-follow recipes and videos from expert bartenders, with a tool that allows consumers to select recipes based on the ingredients they have at home.

"Early results are looking good for Mix Lab - we've seen above-average engagement time and are continuing to improve this fantastic resource for cocktail enthusiasts," says Whitmoyer. Another area that drinks groups are pouring investment into to capitalise on the 'home premise' occasion is RTDs.

"What has evolved since the start of the pandemic is a desire to be outside, and this called for portable solutions," claims Whitmoyer. Bacardi responded by launching three canned rum cocktails in the US last summer and "quickly doubled the forecast". Since then, the group has added a raft of RTD line extensions to its brand portfolios.

Beam Suntory, meanwhile, is looking to "turbo-charge" its fast-growing US RTD business, having already become the category leader in Japan, Australia and Germany. Last September, the Jim Beam maker acquired the On the Rocks RTD cocktail brand, in which it already owned a minority stake. President and CEO Albert Baladi claims the brand is "growing much faster than expectations".

Beam Suntory also launched a line of hard seltzers under its Hornitos Tequila brand, unveiled the Jim Beam Highball RTD and partnered with The Boston Beer Company to expand its Sauza Tequila brand into additional RTD formats. "RTD will continue to play a critically important role for our business and the industry, and we are excited about the future in this particular category," says Baladi. 'Home premise' is here to stay."

For Beam Suntory and many other drinks suppliers, e-commerce has become a crucial channel to increase their access to the 'home premise'. "We are excited about the long-term opportunity in e-commerce and are working to ensure we are capturing our share of this growth," says Baladi.

Beam Suntory is boosting its overall investment in e-commerce, which currently represents more than 15% of its business in China and the UK and is "rapidly expanding" in markets like the US. "The 'home premise' has become very important - and we've seen incredible opportunity as a result," adds Baladi.

"We believe it will remain a vital channel, so we are investing appropriately, prioritising fast-growing channels -including e-ommerce/digital - and continuing to focus on the off-premise, to ensure we are reaching consumers where they are. That said, we also remain flexible to best adjust to changing landscapes, particularly as vaccination rates rise and the on-premise reopens."

For some players, the pandemic has presented an opportunity to associate their brands with new spaces and occasions. For instance, aperitif brands, while largely associated with the on-premise, have become more ingrained in consumers' home-drinking rituals.

Donatien Ferrari, brand ambassador for French group La Martiniquaise-Bardinet, maker of aperitif brand St Raphaël, says: "Aperitif at home has been obviously stronger than ever. But more importantly, consumers were buying top-quality products from their local wine shop in order to recreate an experience at home." Today, Ferrari adds, St Raphaël is connecting with younger drinkers who are searching for "light and easy" serves to make at home, such as the St Raphaël-and-tonic.

Halewood Artisanal Spirits has seen a "big spike in popularity of flavoured spirits" as home bartenders look to put simple twists on their drinks, says marketing director James Stocker. "The great thing about flavoured spirits is that they can be enjoyed over ice, with a mixer or for putting a spin on a host of cocktails, so they're perfect for the at-home cocktail trend."

Halewood has continued to expand its flavour portfolio in the last 18 months, launching new iterations for its JJ Whitley, Whitley Neill and Dead Man's Fingers brands. Looking ahead, Stocker is confident that home cocktails won't be a flash-in- the-pan trend.

"People have become a bit more cocktail savvy during the course of the pandemic, learning how to make their favourite cocktails and even experimenting with new flavours and combinations," he says. "Even as the on-trade reopens, now that people have realised they can quite easily make some of these serves at home, it's unlikely they'll be stopping anytime soon."